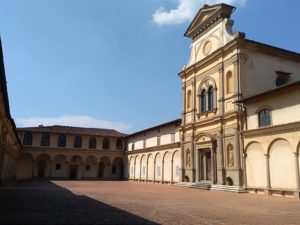 Founded in 1342 by the wealthy merchant and powerful politician Niccolò Acciaioli, the Carthusian monastery of San Lorenzo was supposed to be a very visible sign of his magnificence, of his connections to the House of Angiò (lords of Naples and founders of its Carthusian monastery of San Martino) and an enduring monument of his glory.
The place where the monastery was built contributed to this purpose: the hill of Monte Acuto, a sort of linkage between the urban and southern areas of Florence, located at the point where 2 main roads met, the one coming from Siena and Rome and the one coming from the Val d’Elsa where the Acciaioli family had many properties (such as the castle of Montegufoni, near Montespertoli).

It will be the strong personality of its founder who will give the Carthusian monastery of San Lorenzo its wealthy city-like side, far – not to say opposite to- from the principles of sobriety and austerity professed by the Carthusian order, and which can still be read in the words that Niccolò Acciaioli himself wrote to Amerigo Cavalcanti in March 1356:
“Imperò que tutte altre sustanzie que Iddio me have concedute rimaneranno ali posteri, e non so a cui; solo lo dicto munisterio [la Certosa di San Lorenzo] con tutti li suoi adornamenti sarà mio in ogni tempo, et farà più essere verzicante e duraturo lo mio nome in cotesta cittade [Firenze]” 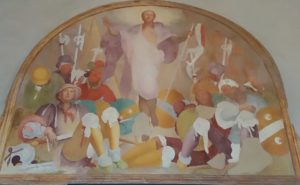 (“All that God gave me will be handed down to posterity, to people I don’t even know but the Carthusian monastery of San Lorenzo and its ornaments will always belong to me, and thanks to it my name will always be young and never forgotten in Florence”).

A rich and grandiose conception that does not alter but integrates with the clear and rational organization of the spaces governing the Carthusian Rule: an isolated life where solitude becomes the ideal place to develop a powerful contemplative mood aimed at establishing a continuous conversation between monks and God.

Despite the changed spirit of the times, the works of art decorating the Carthusian monastery over the centuries, such as the beautiful glazed terracottas by Giovanni della Robbia (1523) or the Stories of the Passion of Christ frescoed in the great cloister by Iacopo Pontormo (1523-1527), will mark the more mystical rather than narrative representation of the Carthusian spirituality. 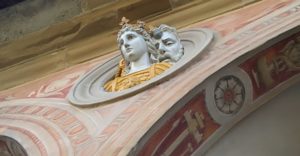 From the architectural and artistic point of view, everything, inside the Carthusian monastery, “has its purpose and its reasons”: here the “fusion between aesthetics and functionality, between art and spirituality has reached a clear and profound synthesis” (G.Leoncini, The Charterhouse of Florence in its relations with the Carthusian’s architecture, Salzsburg, 1979).

Book your guided tour now and discover together with our guides the Carthusian monastery of Florence and its treasures!