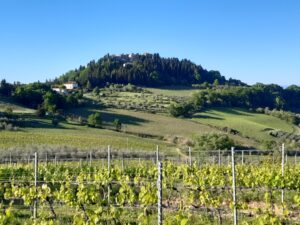 The itinerary takes place along one of the paths that since ancient times have connected the Arno Valley (and the Roman colon Florentia, i.e. today Florence) with the Val di Pesa and the neighbouring Valdelsa, passing through San Casciano, San Pancrazio, Fornacette, Lucardo, the parish church of San Lazzaro a Lucardo; after crossing the Elsa near Certaldo, the road carried on towards west and after reaching Volterra it arrived to the Tyrrhenian coast.

This is a 4-step itinerary (2h30 each): each stage allows you to enjoy breathtaking views and to know, thanks to our licnsed Tour Guides, the millennial history of this corner of Tuscany that has always been dedicated to the cultivation of the land, where life flows following the times and the rhythms of nature. 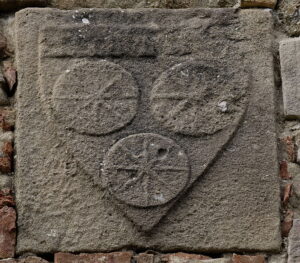 Lucardo Castle and the church of San Donato in Lucardo

Our first stop is Lucardo Castle; thanks to its 442 meters above sea level we can embrace in a single glance the whole territory for a few tens of kilometres, ranging from the heights of Montalbano and Mount Pisano (NW), to the metalliferous Hills (W), up to Montagnola Senese (SW) and the Chianti hills (NE).

The oldest written record about Lucardo is in a parchment dating back to 767: at the time Lucardo, as we read in the document, was the seat of a “curte” that Gundoald, the physician of Desiderio – king of the Lombards, gave that same year to the monastery of San Bartolomeo di Pistoia. 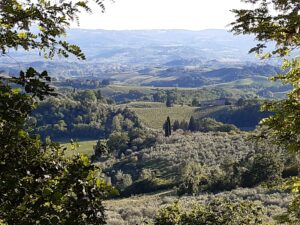 Two centuries later, a high-ranking person claimed his rights and properties over Lucardo: he was Ugo, Marquis of Tuscany. In 998 he gave an extensive range of goods “in loco Lucardo” to one of the most prestigious ecclesiastical institutions of the Valdelsa, the Marturi abbey near Poggibonsi. Together we will discover what Lucardo looked like at this time and how much of the past centuries is still preserved, jealously guarded by the locals who have always lived in their ancient castle.

From Lucardo we take the provincial road SP 79 towards Certaldo. After a few hundred meters we see one of the oldest religious buildings of the area: the priory church of San Donato a Lucardo which from the top of its hill, as strategic as the one of Lucardo, dominates a vast stretch of the beautiful countryside around Certaldo, where olive trees and vineyards alternate with oak, holm oak, cypress and acacia woods. 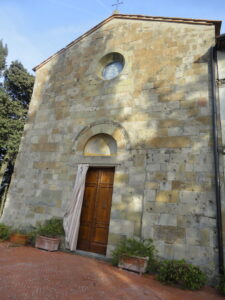 Remembered in documents since 997, the church – and its assets – were the object of the aims of two important abbeys which, between the tenth and eleventh centuries, competed for their jurisdiction. The Pitti family had patronage over the church of San Donato, a family whose origins, as our guides will tell you, are to be found in the countryside of Certaldo, not far from this hill. A family, that of the Pitti, whose patronage our church still preserves precious memories.

Fiano, the Rogai estate and the rural village of Luia

Our journey following the footsteps of the Pitti family continues with a visit to Fiano, a pretty village whose origins are linked to the road itself. In the most ancient documents (1312), the village of Alfiano is quoted as “villa“, an open village, one of the most widespread settlement in the Florentine countryside during the Middle Ages. Together with our Guides you will discover how this ancient village was formed and how it developed, keeping its identity strong and intact over the centuries. 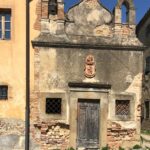 During the visit it will be nice to meet the locals who, with pride, will show you the signs of their history and their past, such as the Monument to the Fallen of the Great War (1915/1918) in the center of the square or the oldest oratory of the Guardian Angel built three hundred years ago next to the most representative building of the town, the Fiano farm, at the time owned by an ancient (and wealthy) Florentine household. With equal pride they will tell you about the beautiful vineyards and olive groves that stretch around the village, many of which – as we discover from the documents – belonged to the Pitti family. 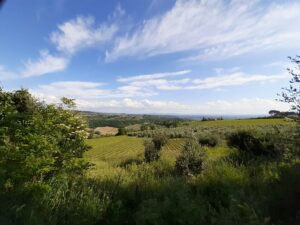 The next stop represents the heart of our guided tour: it is the medieval manor house that we find, always along the road, not far from Fiano. Known as the Rogai manor house, this ancient building conceals a secret that ties its history to the Pitti family which, as has recently been discovered, belonged to the majority of houses and land belonging to the nearby rural village of Luia. 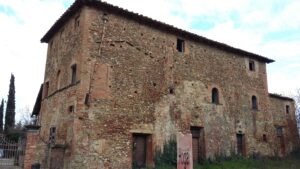 Concerning the presence of the Pitti family in Luia, there is a document written at the beginning of the XV century by a member of the family, Bonaccorso di Neri, who, referring to the origins of his household, wrote that since they were a Guelph family, the Ghibellines drove them out of Simifonti [the village of Semifonte, located 10 km away from Luia and Certaldo] and dominated the village. Their family -then – split into 3 different branches, the first one moved to Luia, and its descendants were a huge and noble family, with many lands and goods. They didn’t have the same name but their court of arms (a real “logo” at the time) identified them without any doubt as part of the same household, strongly and still anchored to their original territories. 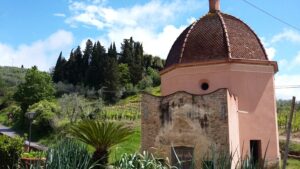 Opposite the Rogai manor house is a beautiful oratory that strikes us with its forms, clearly inspired by two of the most important sacred architecture in Florence: the dome of the Duomo and the Medici Chapels at the basilica of San Lorenzo. His fascinating story that goes from the Renaissance to the present day and is intertwined with the events of those rich families who had their possessions here. Via Piana begins at the oratory of San Francesco, if we follow it, in a few minutes we will reach the ancient “villa” (open village) of Luia: during the journey do not forget to take a look at the landscape opening onto the valley where, among vineyards and fields of olive trees, we see the nearby parish church of San Lazzaro, our next stop. 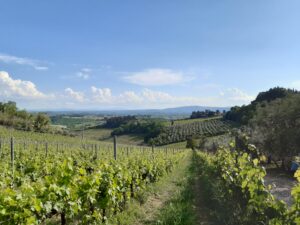 We reach the parish church by taking the white road that branches off from the provincial road SP 79 near Villa il Pozzo, located 700 meters away from the Rogai manor house towards Certaldo: this is a beautiful XVII/XVII century residence, formerly a farm, and before that it was a fortified site dating back to the Middle Ages: its presence is marked by the imposing stone and brick tower, now incorporated into the main complex of the villa.

The parish church of San Lazzaro is one of the oldest churches in the Valdelsa: all the churches and peoples in the territory of Certaldo depended on it, and it claimed the right to baptize over the entire area population. 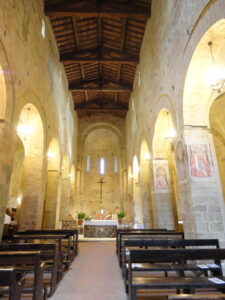 The first known document concerning San Lazzaro dates back to the year 926: we must therefore think that at that time, the parish was a fully established reality, a reference point for all the communities living on the territory; peoples probably gathered in small open villages like the “ville” of Luia and Fiano that we can still admire today. Above the architrave of the access portal stands the coat of arms of the Gianfigliazzi family, a Florentine household who had patronage over the parish church for over four hundred years. With our Guides it will be possible to retrace the various phases that have marked the history of this extraordinary building over the centuries, one of the most beautiful and important examples of Romanesque architecture in the Valdelsa.

Our guided tour through the Pitti family places continues at the village of Pino, located along the provincial road that leads to Certaldo. Here, next to the road, we find another oratory, a symbol like those encountered so far by the prestige of the families who promoted its construction. Like the ancient Rogai house, the small oratory conceals a secret that links its presence to that of the Pitti: the secret is hidden in a coat of arms and in a document written five centuries ago by those who, first, had the opportunity to visit the sacred place of worship. Here is a short passage: 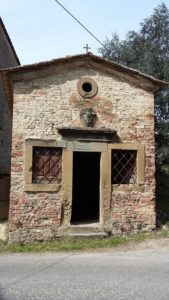 «In the parish of the Pieve di San Lazzaro a Lucardo, in a place called al Pino on 6 December 1594 was erected from the foundations an Oratory or Chapel under the title of Santa Lucia (…). The oratory has 7 arms of longitude, 5 of latitude and 8 of altitude, protected with a locked door, with two iron windows through which those who pass can look inside the said Oratory».

Despite the passage of time, the oratory still looks like five centuries ago, jealous custodian of its secret bond with the Pitti family: a secret that only our Guides will be able to reveal to you!

Our tour ends with the guided tour of Certaldo (5 km),the last important stop of our journey through time and history of the very “best of Tuscany”.

Send us your request and book your guided tour now!